ACES Makes the Move to Schoology

There are so many good things about summer. Long sunny days to enjoy at the beach or the lake. Outdoor concerts and a different festival every weekend. The state fair. And this summer there is an extra reason to celebrate because the ACES 101 Course that was previously available on the Minnesota Literacy Council’s training website has been revamped and moved to Schoology. 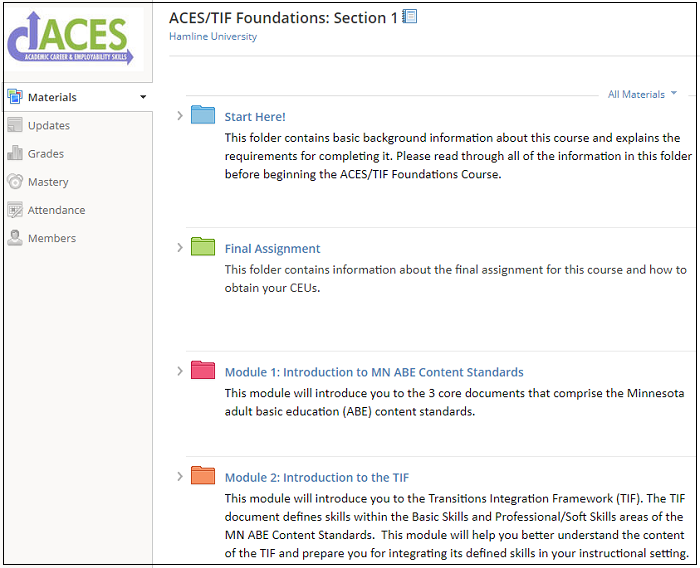 The ACES course, which has been re-branded as ACES Foundations, is following in the footsteps of the CCRS Foundations course which made the move to Schoology in fall 2018. Much of the content from the original ACES course has remained the same, but it is being delivered in a new way.

Each course module now has its own folder in Schoology. Course users move sequentially through all of the materials in a folder, viewing videos, taking quizzes, and answering discussion questions. 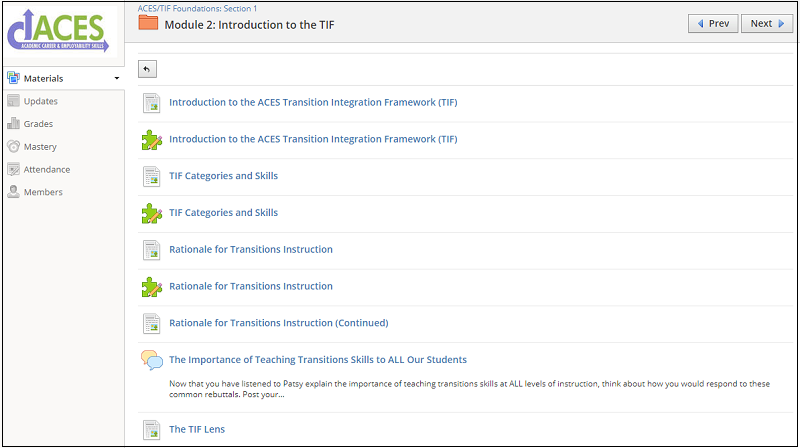 The discussions, located in the Updates tab on the left, are a new feature that works well with the Schoology platform. In the old course, users were asked to reflect, but there wasn’t a way to share those reflections. Now the reflections can be viewed and commented on by the course facilitator and other users to form a sort of online community.

Besides the benefit of giving the course a new look and feel, moving the content to another platform provided the opportunity to review all of the course materials and make changes.

The new ACES course isn’t the only way for people to get involved with ACES on Schoology. There is also a new ACES Networking Group launching this fall, which will be a place to share resources and ideas for integrating ACES/TIF in the classroom. The group will be moderated by the ACES Coordinator, Stephanie Sommers. You can use the group to ask questions about ACES/TIF, to get ideas about teaching the skills in a particular ACES category, or to share best practices around implementing classroom routines and norms.

So whether you’re new to ACES and ABE or a seasoned teacher with years of experience, make some time to check out the new ACES resources that are available on Schoology as part of your back-to-school preparations.

Are you new to Schoology?

How to join the ACES Foundations Course:

How to join the ACES Networking Group: