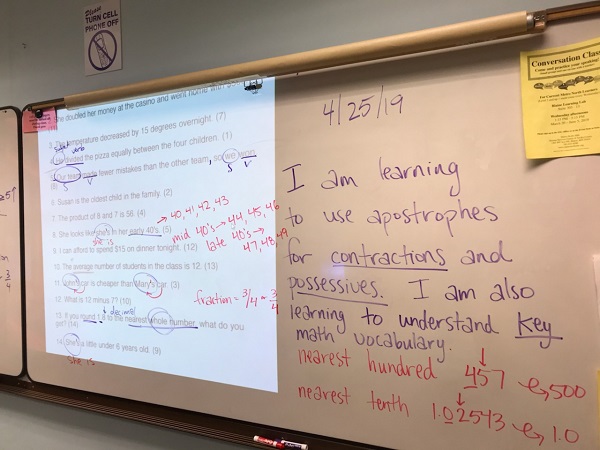 We Teach Numeracy, Not Just Math: One Site’s Journey to Improving Numeracy Instruction

Numeracy is the ability to cope confidently with the mathematical demands of everyday life in the home, workplace, and community (Cockcroft, 1982; Withnall,1995).

On some days, the 11 o’clock hour at the Blaine Learning Lab sounds more like a party than school. Learners are engaged and teachers are excited. Walking through you will hear numeracy conversations happening at every level.

In the spring of 2017, the Blaine Learning Lab (Metro North ABE) staff decided it was time to take a new, site wide approach to numeracy instruction. There were challenges and triumphs, disagreements and support, but in the end, everyone discovered that there is so much more to numeracy instruction then just teaching “math”.

In order to shift to this numeracy instructional model, adjustments had to be made across all programming. This meant that teaching schedules needed to be changed, learners needed to be shuffled, and classes needed to be evaluated. Staff met in committees, surveyed learners, and researched best practices. As a supervisor in the program, I dedicated time, funding, and a lot of patience to the process. I had a clear vision and big picture idea of the path I wanted the instructional shift to follow, however, it was the perseverance and dedication of the staff that made it happen.

Up until that point, almost all of the intentional math instruction was done in the upper level ABE classes. The biggest push came at the end, when learners were preparing for the GED or completing their high school diploma. Learners were primarily placed in class levels on their TABE reading scores so math lessons were either totally individualized through the use of workbooks, or lessons were taught to whole groups with topics covered in isolation (ie: fractions, fractions, and more fractions).

This was model was a disservice to our learners and staff. Learners were pushed through the program too quickly because there were no stopping points built in for math- only reading and speaking (they would move from level to level based on reading, but their math scores were all over the board). Which ultimately meant the teacher at the highest reading level had learners at the lowest math level and they were expected to get them GED ready in a few short months.

With the introduction of PLCs (Professional Learning Communities) in 2013, math instruction became a common topic of conversation, however, it took until 2016 for staff to take the leap into reevaluating how and when things were taught. As more staff became trained in College & Career Readiness Standards (CCRS) and the mathematical shifts, the more obvious it became that, while we had always done a good job at teaching math, there was a lot of room for improvement.

The ABE classes were the first to make some changes. In order to be able to focus instruction on a smaller span of grade levels, learners also needed to be grouped by TABE math levels. To making this possible, the teachers aligned their schedules and taught math at the same time everyday. This allowed for better grouping and sharing of learners. During this time, teachers utilized PLC time to work on developing assessment tools tied to the CCR standards. Teachers often commented that this time to look very closely at standards and practices at all levels provided a clearer view of the foundational skills outlined in the standards and how they were currently incorporated into instruction. 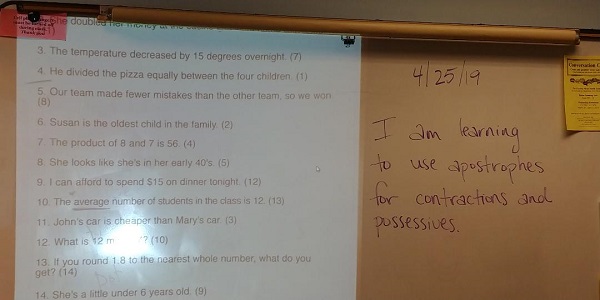 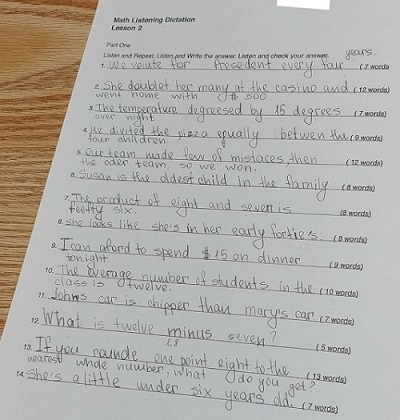 All levels of instruction (1-7 and Basic Skills) aligned their schedules to teach numeracy from 11:00 AM-noon, Monday-Friday. There were staff members who wholeheartedly supported the change, while others needed a little more convincing. Throughout the process we heard statements like “My (ESL) learners don’t want math. “ “My (ESL) learners are here to learn English, not math.” “My learners know more math than I do.” “I don’t want to teach math worksheets.” These fears were understandable. For most, the thought of “math” brings up feelings of anxiety and stress. They think of “kill and drill” type worksheets and topics like algebra and geometry. This is not what we wanted our instruction to look like. We needed to figure out how to teach the language of math, not just the skills.

As a group, we compiled a list of all of the different numeracy topics that were already being covered, as the list grew, the teachers began to realize that this was not a huge shift in their actual instruction, more of a shift in their intentionality of instruction. The only differences would be to move the numeracy type lessons (that they were already teaching) to the designated “numeracy” hour, have a core group of learners during that hour everyday, and to use the CASAS Life Skills math assessments with the lower level ESL learners. They would continue to teach English, life skills, vocabulary, and technology but within the context of math. This allowed us to think of the idea of teaching numeracy- not just math. PLC time was then utilized to create instructional tools and supports for ELL students at all levels. The product of these meetings was a variety of vocabulary lists, instructional resources and modified tasks that responded to a more diverse student audience than traditional materials.

The Blaine Learning Lab is currently in this phase of implementation. New growth opportunities have come with the new TABE 11/12 series. Classes are now instructing based solely in CCRS levels, not grade levels. The skills gap between the learners has lessened, and the learners remain in a level until they show mastery. English Language Learners are now able to join ABE math groups to better meet their needs, and there has been a strong focus on building coherence between and within the levels.

One final thought: Among the many, many lessons learned throughout this journey, the most important has been that numeracy is just as important in our lives as literacy.

* Cockcroft, W.H. (Ed.). (1982). Mathematics counts: Report of the Committee of Inquiry into the Teaching of Mathematics in Schools. London, England: Her Majesty’s Stationery Office.