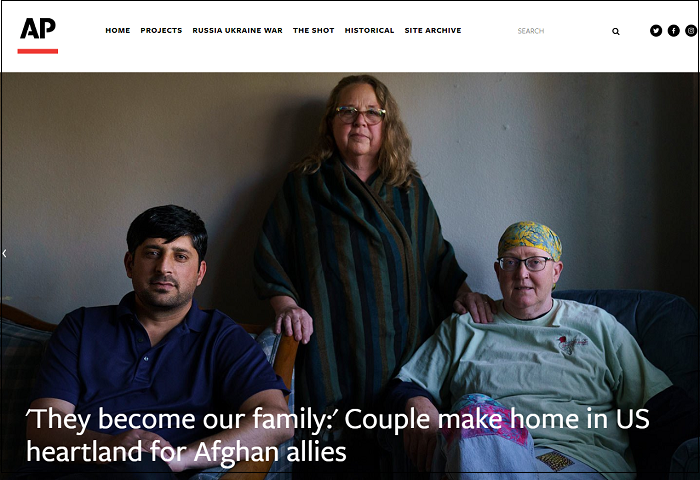 One thing I’ve learned during my years in adult education is that you never know what is going to happen – or who is going to walk through your door – on any given day. This was never truer for me than it was last fall.

The day started as expected but quickly became a series of unexpected events. One of my English learners, Ihsan, walked through my door as usual – followed by a woman carrying a notepad and laptop bag, a man carrying video equipment, and another man carrying cameras and tripods. The woman extended her hand, identified the trio as members of the Associated Press, and asked if it would be all right if they spent the day interviewing, photographing and filming us.

I looked over to Ihsan for his reaction. He nodded his head so I said, “Sure! Welcome to Fergus Falls Area Adult Education.” They proceeded to interview us and lean in with cameras and video equipment throughout the course of the next three days as they gathered what they wanted for an article that eventually was published and went global instantly.

So what was it that brought this internationally recognized group through my program’s door in the first place?

It was the compelling story of my student’s life. Prior to his dramatic rescue from Afghanistan and subsequent arrival in the United States, Ihsan had been a university-educated horticulturist working alongside the U.S. government in Afghanistan. He brought his knowledge of the land and agriculture, dreams for planting gardens and orchards that could continue to feed local families, and his fluency in Pashto and English to assist the United States Department of Agriculture adviser in that region, a woman named Caroline Clarin.

While they were successful in establishing thriving gardens and orchards which are now able to feed local families as millions of other Afghans face starvation, it came at a high personal cost to both of them. Because of his work helping the U.S. government, Ihsan became a hunted man as the Taliban continued to gain power in the region. He and his family spent seven fear-filled years hiding from the Taliban and trying to escape what had now become a war zone. These years spent running for their lives took a toll on the whole family. The children are still alarmed by loud, unexpected sounds.

The family’s rescue finally took place through the extraordinary efforts of Caroline, the USDA adviser whom Ihsan had helped. After she learned that two more of Ihsan’s close friends had just been killed – one by a car bomb intended for Ihsan – she used $6000 from her own retirement fund to secure a flight to Minnesota for the whole family. She and her wife, Sheril, went even further by opening their home to Ihsan and his family until housing could be arranged.

Ihsan has chosen to stay in this area because he likes it and says that the people are good. He speaks of his desire to buy land here so he can once again use his skills and passion for horticulture by planting and tending to his own gardens and orchards.

In addition to helping house Ihsan’s family, Caroline and Sheril made sure that each family member was registered for their appropriate school. For Ihsan and his wife, Sediqa, that meant joining me in adult education. Ihsan was already fluent in English and just needed to work on pronunciation and learn some of the culture of this area. Sediqa, however, spoke no English and wasn’t literate in her first language, so her needs have been much more extensive. Fortunately, she is extremely motivated and is dedicated to her learning.

It was actually Sediqa’s online class with me that brought the Associated Press through my door that day last fall. Unbeknownst to me, they were sitting in Ihsan’s living room, silently listening and observing as Sediqa and I worked together. While I think it was probably good that I was unaware of their presence at the time, it also taught me a valuable lesson.

Whether your door happens to be physical or virtual, you just never know who will walk through it or what will happen on any given day in adult education.

Be sure to check out the AP article and video, which provide more detailed information!

Stay tuned for Part 2 of this article, where Sara talks more about working with someone who speaks no English and is not literate in their first language, and what strategies she has used that have proven helpful.