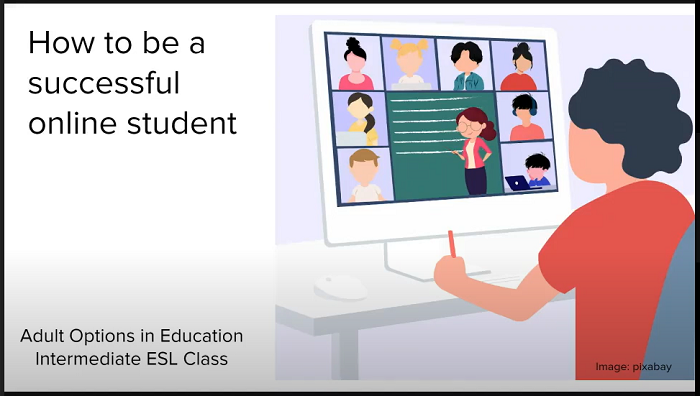 Project-Based Learning in Action: How to Be a Successful Online Student – Part 2

In Part 1 of this article, ESL instructor Dan Bruski describes Day 1 of a project-based lesson around creating a list of class rules or expectations. In Part 2, Dan outlines Day 2 of this project and the subsequent wrap-up activity that culminated in a video that is now being used to help orient new students.

Following from our Day 1 vocabulary focus, we reviewed sentences using before, during and after and nighttime routines.

A) What did you do before class today?

B) What will you do after class tonight?

C) What do you do during class?

We also reviewed the Google form from Day 1, in which students identified each action as being something done before, during or after a successful job interview; we focused especially on the additional ideas that students wrote. We looked at those additional ideas and worked together to talk about whether they were for before, during or after the interview.

With the assistance of two volunteers, students were then placed in three breakout groups of about five people. Each of the groups was given a different scenario, which they were to talk and write about, and prepare to present to the class after an allotted time:

In their groups, students brainstormed ideas for what needed to be done before, during, and after the scenario, which the teacher or volunteer wrote on a shared screen. My group had the family dinner, and there was some interesting discussion about how not all cultures do meals the same way, so some compromise was needed to condense our responses.

Once each group had a good-sized list, they were asked to narrow it down to only the six most important before, during, or after sentences. They used the remaining time in the groups deciding who would present each section to the class and practicing reading aloud. The groups then came back together and made their presentations to the whole class, accompanied by the written notes taken by the volunteers or teacher.

Part of the next class involved looking at the sentences we wrote as wrap-up during the previous class, which were mostly written in first-person present tense (I study on Moby Max). We worked together to convert them to imperative tense (Study on Moby Max), and we added even more ideas as we discussed being a successful online student and the audience for our project. I added one of my own about not attending class while driving a car. 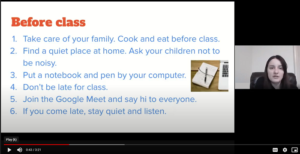 Once we had enough material for a good collection of slides, I asked for students who would like to volunteer to help make a video, telling them that our expert advice will help the new students be successful online. It took a few days of pulling students aside after class, but eventually we got a few brave readers to stay and read their parts aloud. They all gave their permission to use the video in social media, the school website, and of course with new students.

This video is currently part of all new student orientations at Adult Options in Education!

These lessons were designed with an end goal in mind: the crowd-sourced creation of a list of good online student practices. To reach that goal, some time was spent practicing the skills needed to write the list and to present those ideas. This wasn’t the first time my classes have created “class rules”, but this was the first time we did it in an online class. All students who were involved got to have their say, and I think that as a result, frustration among classmates (and their teacher) over online class etiquette has decreased.

This was also the first time that a project like this had an audience wider than my classroom. Although I originally just sent the video to new students joining my intermediate ESL class, it is currently being shared with all students new to our program. It turned out to be an authentic contribution to our school. The students who appeared in the video had a chance to be leaders, and the whole class contributed to our ABE program by lending their expert advice as online class veterans.

Using Google Meet, I flipped through the slides as students read and recorded the session using the recording function in Google Meet. In retrospect, I think we could have taken more time to practice each person’s part of the video for pronunciation and greater understanding of what they were reading. Once I had all my recordings, I used iMovie (only available for iOS and MacOS) to keep the best takes, splice together clips and add some royalty-free music I found online.

To get more detailed information about this mini-project, including the lesson slides, check out this posting in the ATLAS online Project-Based Learning resource library.